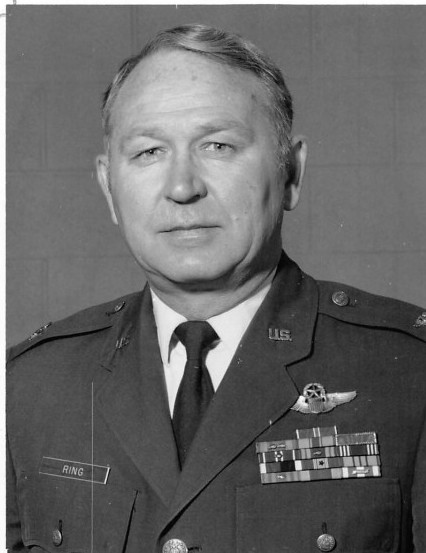 Colonel Richard “Dick” E. Ring (Ret. USAF), passed away in Gallatin on Monday, July 5, 2021, at the age of 92. He was born on August 2, 1928, to the late Eugene and Merriam Ring, in Watertown, South Dakota. He was a graduate of Central High School in St. Paul, Minnesota, and The University of Nebraska at Omaha. Upon graduation from pilot training, he married Mina Baker from Gallatin.

Colonel Ring enlisted in the US Air Force in 1951 and was commissioned in 1953, as a pilot. During his 27 years in the Air Force, he served at bases in Germany, Georgia, and California, where he served as an Instructor Pilot in the KC-135. He was a Squadron Commander in Vietnam, where he flew the AC-119, providing close air support. After serving in Southeast Asia, he was transferred to Michigan where he served as Squadron Commander and Director of Resource Management when he retired in 1978. His military decorations include: The Bronze Star, Air Medal with 2 Oak Leaf Clusters, Air Force Commendation Medal with 1 Oak Leaf Cluster, Italian Star Solidarity (Second Degree), and the Royal Thailand Supreme Command Forward Badge (First Degree).

Visitation will take place on Friday, July 9 at Anderson Funeral Home, Gallatin from 3:00 P.M. to 7:00 P.M. Funeral Services will take place at Gallatin First Presbyterian Church on Saturday, July 10 at 2:00 P.M. with visitation one hour prior to the service at the church. Interment with military honors will follow at the Gallatin City Cemetery. Serving as honorary pallbearers will be the Gallatin Rotary Club Noon, The Geezers Club, Bill Hamby, Don Birdwell, George Batte, Ralph Holtzfaster, and Les Van Someren, Scott Riggsbee.