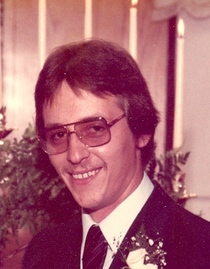 Frank “Ritchie” Baker, age 58, of Gallatin, passed away on Tuesday, February 16th at Vanderbilt Medical Center.  Funeral Services will be conducted on Thursday, February 18th at 1:00 p.m. from the Chapel of Anderson Funeral Home, here in Gallatin, with Brother Ronnie Briley officiating.  Hargis Wade, Adam Wade , Bob Degraff,  and Barry Draper will serve as Pallbearers.  Visitation will be held on Thursday, starting at 10:00 a.m. until service time at the Anderson Funeral Home.  He was born on Thursday, August 22, 1957, born to the late Frank Edward and Ella Ward (Ritchie) Baker.  He married the former Katherine Woodall on November 15, 1984, who survives and lives in Gallatin.  He had worked at the Gap and Walmart before becoming disabled and was a member of the First Methodist Church in Gallatin.  In addition to his wife of 31 year, he is survived by daughters and sons-in-law, Ella-Marie (Blake) Brush of Gallatin, Mary-Star (Dave) Preston of Hendersonville, Laura-Francis (Clint) French, sister, Jeanie Banks, mother-in-law, Helen Woodall, all of Gallatin, grandchildren, Mason Champlin, Sadie Marie Bush, C. J. Jett, Lucy Preston, Kayla Preston, Breonna Preston, Charles French, and Lillie French.

Online condolences to the family may be left at www.andersonfuneralhome.org

To order memorial trees or send flowers to the family in memory of Frank "Ritchie" Baker, please visit our flower store.
Send a Sympathy Card