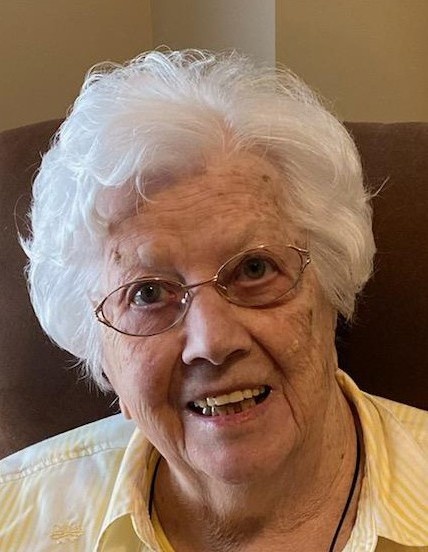 Norma was born to Carlos Wayne Schaut and Grace Mae Lapp Schaut on September 25th, 1924 in Mt. Carroll, IL. She went to be with her Heavenly Father on February 15, 2021. She was 96 years old.
Norma was raised in Mt. Carroll and graduated from Mt. Carroll High School in 1942 and from Shimer College in 1945. She was active in instrumental and vocal music activities during these school years, and was awarded the DAR award her senior year. She married Lt. Harold J. Holt on July 4, 1945 at Midland Air Force Base, Midland, TX. Her husband's military career as a jet tanker pilot took them to Malden Air Force Base, Malden, MO; Lockbourne Air Force Base, Lockbourne, OH; and Barksdale Air Force Base, Bossier City, LA, where they eventually retired in 1970.
When Lt. Col. Holt died in 1998, Norma returned to Illinois to be near family, residing in Fulton. She lived there until moving to Tennessee in 2017 to be with her daughter Jan. She was a member of the Fulton Presbyterian Church and the Jo Daviess Chapter of the DAR.
Norma was preceded in death by her parents; her husband; her brothers Maurice, Richard, William, James, and Robert Schaut; her sisters Mary Richter and Phyllis Senneff; and her daughters Judy and Linda.
She is survived by her daughter Jan Holt Tomlinson, Bethpage, TN; grandsons Colin H. Dearth, Columbus, OH, Barry A. Daroe, Gahanna, OH, and Sgt. Michael S. Young, Sneads Ferry, NC; granddaughters Amanda J. Wright, Lebanon, TN, and Erica L. Fuller, Springdale, AR; ten great- grandchildren; and many nieces and nephews.
Graveside services for family will be held at Oak Hill Cemetery in Mt. Carroll at a later date. In remembrance of Norma and her long-time love of reading, please make donations to the Carnegie Library in Mt. Carroll through the Mt. Carroll Library Rehab and Expand Fund, 208 N. Main St., in her name.

To order memorial trees or send flowers to the family in memory of Norma G. Schaut Holt, please visit our flower store.