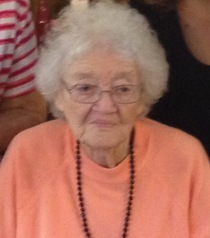 A native of Sumner County, she was born to the late Edward M. and Nellie L. (Phillips) Griffin.  Besides her parents, she was preceded in death by her husband, Homer R. Graves; sons, Byron Graves, Ward Graves Sr., Jerry Graves; brothers, Duane Griffin, Richard Griffin; and son-in-law, Malcolm Hall.

Mrs. Graves was a long time member of the Lambuth Memorial United Methodist Church, and had retired from the Eaton Corporation several years ago.  She was also a Past Matron of Bethpage #5 Order of Eastern Star.

In lieu of flowers, memorial donations are suggested to the Lambuth Memorial United Methodist Church, 1042 Hartsville Pike, Gallatin, TN 37066.  Online condolences may be submitted at www.andersonfuneralhome.org.

To order memorial trees or send flowers to the family in memory of Wardyne Graves, please visit our flower store.
Send a Sympathy Card